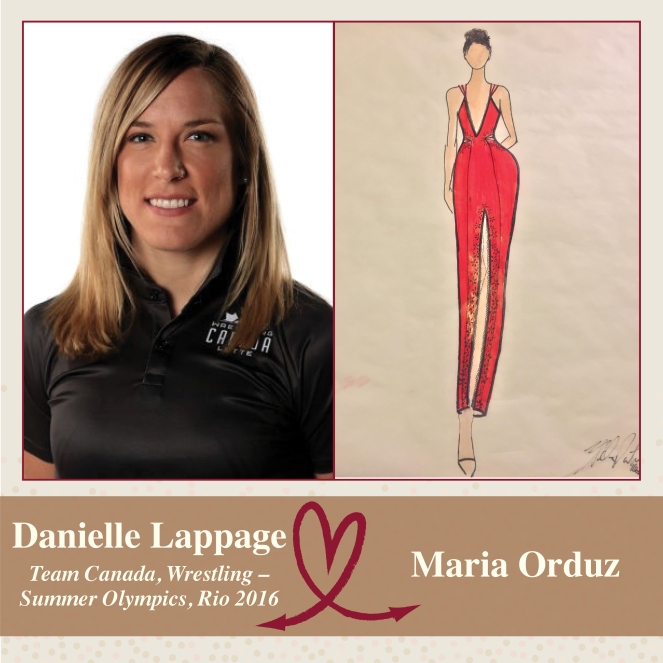 These two newcomers to the Heart Truth family are an exciting duo! Danielle Lappage grew up in the small town of Olds, Alberta, as the second oldest child of four siblings. She was involved in many different sports growing up and as a result, was always an athletic and competitive individual. Danielle was first introduced to the sport of wrestling in sixth grade when a couple of her friends joined the school’s wrestling team and convinced her to come out to a practice to try it out. Her love for the sport has been growing ever since and in 2006, Danielle made her first ‘Cadet’ national team. Since this time, she has been a member of Team Canada and has had the opportunity to represent Canada at many international events – including the 2016 Summer Olympics in Rio!

Danielle moved from Olds to Vancouver, BC in the fall of 2008 to attend Simon Fraser University (SFU) and to wrestle for SFU’s varsity wrestling team. Danielle graduated with her Bachelor’s degree in Criminology in June 2013 and finished her university wrestling career as a three time WCWA national champion. Danielle decided to continue her education at SFU, and enrolled in graduate school in the fall of 2013. In September 2015 she successfully defended her thesis which focused on the topic of “gender and policing”. She is currently a full time athlete living in Vancouver and wrestling for the Burnaby Mountain Wrestling Club.

We are extremely excited to have Maria Orduz part of our show this year, most specifically sharing her MakeFashion creative talent with us. The opportunity to celebrate design fashion with wearable technology will be an incredible way to showcase the cause of our event, for heart health research – and perhaps the future of fashion for good health. Maria and her team have something incredible planned for Danielle. Maria Orduz is a Colombian-born fashion designer with a passion for creativity, innovation and technology.

A Fashion grad from George Brown College in Toronto, Maria has over six years of professional experience in the industry. She has worked in apparel design for major Canadian retailers including Mark’s Work Wearhouse, as well as several wearable art and wearable technology initiatives landing her shows in San Francisco, NYC and Shanghai . Her work has been highlighted in publications such as Elle Canada online, Avenue Magazine, Metro news, and several North American fashion and lifestyle blogs. Maria is happiest when involved in unconventional projects pushing her own creative boundaries, in which play and instinct are key. She is mostly inspired by music, the perfection of nature, and edgy architecture.

From our hearts to yours,

More about our Heart Truth journey…